Dominique Leone's self-titled LP is one of my favorite records, an absolute desert island pick if I were inclined to prepare for desert island abandonment.  For me, it's a perfect combination of pop songwriting, great lyrics, and all kinds of compositional touches outside of the pop world.  There are passages where ostinatos evoke minimalist soundscapes, sheets of noise flow like early Boredoms tracks, angular melodies evoke the best of 70s Europrog with classical and folk influences (even mixed with electroacoustic and musique concrete textures in the middle section of "The Return"), and those vocals!  Layers of confident vocal harmonies, melodies, and contrapuntal countermelodies evoke everything from the Beach Boys to Magma at times.  And there are some simply touching, beautiful songs like the closing track, "Conversational." 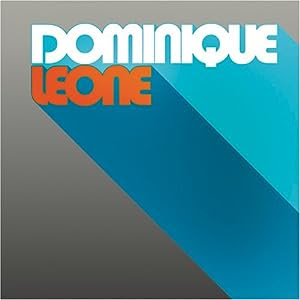 When you consider that Dominique composed, performed, and recorded the whole record alone (on a digital 4-track, no less!), it's even more impressive.  Most of my favorite recordings tend to be singular visions like this, the work of one person following their ideas to detailed, perfected extremes.  The DL s/t LP is nothing if not uncompromising as an artistic statement, but its idiosyncratic nature remains very approachable.  It's a record that deserves both popular and "weirdo music" admiration.

There was supposed to be a vinyl edition of the s/t LP--it was mentioned as upcoming in Important Records emails several years ago.  But it never appeared.  Dominique, if you're ever reading this, is it gonna happen?  This, and the Dirty Projectors "Getty Address," are the 2 recordings I most want to see available on vinyl.  If Important isn't going to do it, do a lathe-cut short run or something.  It really needs to happen.

A few weeks ago, Leone made an amazing piano/overdubbed vocal arrangement of Stravinsky's Les Noces available for free on his BandCamp page.  This is some wild stuff--Leone manages to capture an entire mixed chorus arrangement by himself, with the addition of some electronic manipulation to capture the bass-range parts.  His many voices are accompanied by the very capable piano skills of Kanoko Nishi and Regina Schaffer. If you want a great (and free) introduction to Leone's mad skills, head over and grab these tracks.  While you're at it, you can also pick up the free Summer EP from July 2010, which isn't my favorite of his recordings, but it'll give you a sampling of his approach to pop.  The Works in Progress demo has even more cool-and-free stuff to check out, too.

If you end up liking the Les Noces recording, do consider donating to the new Kickstarter Campaign to help fund a chamber ensemble performance of this arrangement later this month in Berkeley at the Maybeck House.

Here's a live clip of a Dominique Leone gig at SXSW 2010: