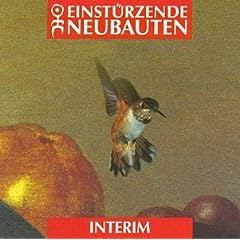 Album(s): Interim EP, Malediction EP
Reflections: EN earned their reputation in the world of industrial music more literally than many of their peers. Much of their earlier music features sounds generated by banging on various kinds of metal, wood, and glass objects, new instruments and devices built from found/abandoned objects, and an powerful live presence, sometimes staging shows where buildings and bridges could be incorporated directly into the performance or recording. Around the time of these two EPs, though, the band began a real metamorphosis, adding many gentle moments and passages of real beauty into their arrangements. These albums feature a few tracks from the 1993 full-length release Tabula Rasa with a few B-sides.
I found myself compelled to highlight these recordings especially because of the multiple language versions of "Blume." It is interesting to note that Tabula Rasa documents not only a musical transition in the music of EN, but languages other than the band's native German suddenly become prominent in the vocals. In addition to German, English, French, and Japanese versions of Blume (all of which also feature some Latin passages), there are English vocal versions of several other album tracks, and full translations between German and English in the liner notes. At the time, vocalist Blixa Bargeld reflected on the change:
"German is still my major language, but we are talking in English right now and the majority of our audience just doesn't speak German. For long periods of my life I don't even speak German. I go on tour with the Neubauten and with Nick Cave, and when I go on tour I almost never speak German. Talking in English comes naturally to me now. . .when I'm two weeks on the road in America I start thinking in English. I comes as naturally as it is thinking German when I am home. . . now trying to write everything in German would be the same kind of lie that writing in English ten years ago would have been. . .not to forget the alienating effect! More than writing in English I would like to sing in languages I don't actually speak just using some translations that somebody else did for me." --from Einsturzende Neubauten, Stampa Alternativa/Nuovi Equilibri Collana Sconcerto, Prima Edizione Gennaio 1993
Einsturzende Neubauten online
Buy from the band