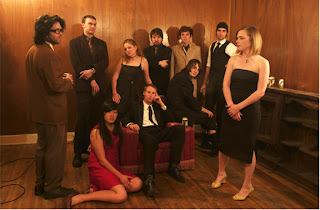 I plan to include some local folks in this series, and I'm delighted to open with Papers. Their album is probably the Lincoln recording I return to most often, as every song is a true delight. Papers, sadly, is no more.
Mostly led by multi-saxophonist (and facile dabbler on other instruments, too) Junebug, Papers delivered a mix of truly great songs presented in arrangements that are simultaneously creative/fun and respectful of many pop and jazz arrangers of the past. One hears moments that are reminiscent of everyone from the Duke to Burt Bacharach, and songs are played in a tight-but-loose style that forces you to listen while suddenly craving a case of Old Style. I always return to this album for the excitement of hearing a band that manages to make cultural/musical references to every decade from the 1920s to present day while still feeling fresh and new.
Take the intro to "Headlong & Hellbent," for example. That bari (or bass?) sax D# pulling into a concert E Major chord by the whole band, plus the almost pointillistic rhythms used throughout the intro, create an atmosphere that manages to be both timeless and emotionally specific. And I'm not sure enough good things could ever be said about album closer, 'The Chorale," which pulls the listener through several epic rounds of tension and release. This is a band who knew how to make an emotional statement. It doesn't hurt that most Papers members are multi-instrumentalists, and folks who love to learn more about their instruments. It really showed.
Rumor has it that another batch of Papers songs were nearing the recording phase when they fizzled out. Here's hoping for a CD, at least, if not a full-out reunion. In the meantime, look for shows from Andy Butler, former Papers ivory-tinkler, who has played a handful of shows over the last year.
Papers on MySpace
buy Papers on CD Baby